From Redux to Hooks: A Case Study

After several years of using Redux for most of our projects we decided to try useReducer/useContext approach instead. Here is what we learned.

Using Hooks instead of Redux for state management is by no means easier.

You have to be already familiar with the underlying concepts and understand the tradeoffs. Without relying on Redux you lose out-of-the-box performance optimizations, middleware support, devtools extension, time travel debugging and a bunch of other things.

On the other hand you can noticeably reduce boilerplate and make iterations faster.

Why it worked for us

Before we go into details about "how" let's focus on the question "why". We decided to take this route because our project had very specific requirements.

Mark Erikson, one of the maintainers of Redux, recently did a great talk called "The State of Redux" in which he addressed some of the myths and misconceptions about Redux. He also mentions when it makes sense to use alternative solutions. I highly suggest watching it before you decide on this path.

Having a single store in Redux comes with benefits, but at the same time you end up putting everything into global namespace. Most applications profit from this, you can even create nested reducers and use naming conventions for actions. But if your global state is small and you know for sure that specific slices of state will only be used by specific areas of your application, making them global makes you feel.. uneasy.

Instead, when using Hooks we can leverage the power of useReducer/useContext combination to create multiple "stores" for different areas of our application. This goes more in the direction of MobX and state management solutions inspired by Flux architecture. We are essentially creating multiple large compound components.

This is what it looks like visualized with my crazy Paint skills. 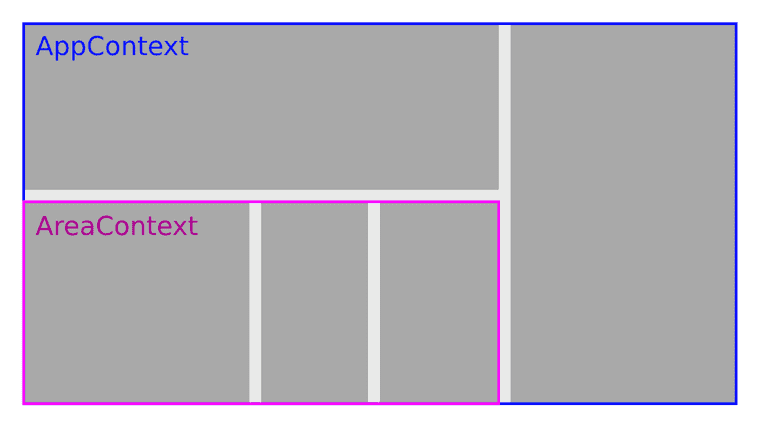 Here is an example Provider which makes state object and dispatch function accessible to all the child components. This way they have access to all the data from our store and can dispatch actions to manipulate this data.

We can consume multiple contexts using useContext or custom hooks we created. As you see, we don't need any higher order components like connect or render prop patterns.

As TypeScript gains more and more adoption we often have to ask ourselves: "Does this work well with TS?"

Using TypeScript with Redux is by no means an easy task. Suddenly realizing that the component you are working on needs to be connected often results in a frustrated "sigh". There are multiple different approaches and libraries available with different levels of complexity, flexibility and amounts of boilerplate code.

Hooks on the other hand are very pleasant to use with TypeScript. Here we see discriminated unions used to create typed actions and a reducer. The produce part is coming from immer and makes working with immutable updates much easier.

In fact, we can go even further on our quest to reduce boilerplate and install use-methods library, which is built on top of useReducer, already uses immer under the hood and negates the need for explicit action types. Incredible stuff.

For more information on React usage with TypeScript refer to this cheatsheet.

React-redux implements complex performance optimizations for you. Your connected components won't be rerendered unless there are changes in the state slice they are depending on.

useContext, on the other hand, doesn't let you subscribe to a part of the context value without fully re-rendering. It means useContext will always re-render every connected component regardless of that component caring about that change or not.

Most of the time this is not an issue because re-rendering components in React is actually really cheap. The problems arise when there are large amounts of elements being re-rendered or store updates happen really frequently, for example because of textarea state change or some drag-and-drop.

So, what if you start experiencing rendering performance problems?

The Editor component in the code example below will still be executed, but the JSX part won't be re-rendered unless some of the dependencies passed to useMemo change.

Another solution would be to split component into two and wrap it with memo, but I like the above approach more because you avoid creating unnecessary components. Take a look at this comment from Dan Abramov for more information on this topic.

Selectors allow us to efficiently compute derived data from the store and can be composed on top of each other. We can mostly replicate this behaviour using hooks, but this approach is not meant to completely replace a library like reselect for example, because it only works on a component level.

There is currently no possibility to do something like this:

And probably won't ever be, because that's not what useReducer was designed for.

So we did data fetching with useEffect and also created a custom useReducerWithLogger as a replacement for redux-logger.

Time travel debugging is one of those features that creates an immediate "wow" effect, but you rarely end up using it for actual work. Nevertheless, there is a new project called react-rewind which tries to replicate this functionality for useReducer.

With future in mind

Concurrent React and Suspense are coming and raise a whole bunch of questions. Will current state management solutions work the same way as before? Will something break? Redux is not maintained by the React core team, so we are kinda in the dark here.

Mark Erikson himself told that they don't have enough information right now and will worry about it when Suspense/Concurrent Mode come out.

With hooks, on the other hand, we at least can be sure that React team "has our back covered".